You’re standing at the edge of a precipice, and in front of you, everything is pure white. Deep drifts of freshly fallen snow have obscured the edges of the piste to the point at which definition is negligible. You look down at your feet – a mistake – and see that instead of sensible, grippy boots, your feet are elongated, tapered and completely without traction. An icy breeze blows across your forehead and your breath shortens. You start to slide slowly downhill, and in that second, you know without doubt that you are going to fall down the mountain – it is inevitable, because this scenario feels utterly unnatural.

This is how you will die. 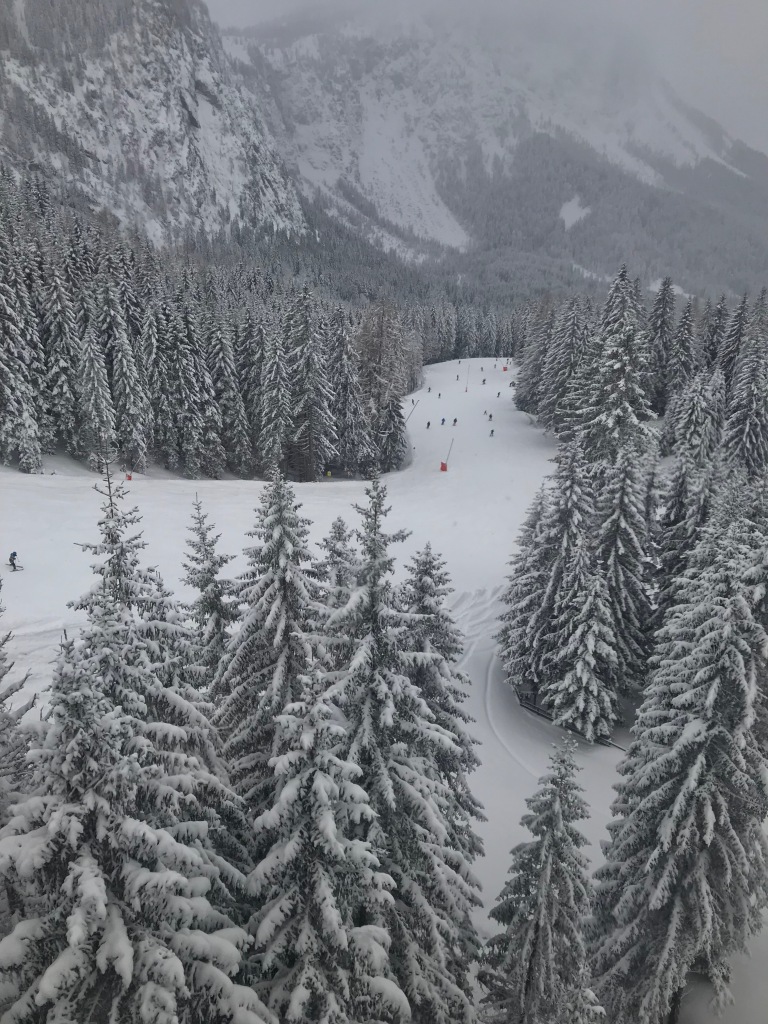 This picture, I’m sure, is fairly benign to the seasoned snow-sport enthusiast. Up until the past weekend, I would’ve categorically described myself as a non-skier. I had skied, but I did not ski. My personal history of this particular activity is fraught with a carefully curated list of memory highlights including: the feeling that I was going to fall off a cliff and be found half-eaten by wolves weeks later, sliding down a red run on my arse and having to be rescued by a stranger, and ripping half the skin off my legs on the spiky plastic “slope” after a one-on-one lesson at Telford dry slope . My parents paid for me to go on the Year 8 ski trip, even though I told them it would be a waste of money to send me because a) I had no friends at that point in high school, so I wouldn’t have any fun, and b) I had a morbid fear of heights, which I knew would not magically disappear after a few days of ski instruction from a 19-year old chalet boy on his gap year.

I tried keeping up in the school group, I really did. I felt positive and hopeful on that first morning, getting my red boots fitted, wearing my brand new salopettes, lilac ski jacket and wrap-around sunglasses with blue tint (it was 2003, so this was a perfectly commendable accessory for a pre-teen). The resort in Les Trois Vallées had an underground shopping mall and I loved sharing a room with three girls from another tutor group who would go on to be great friends of mine well into adulthood. I loved the aprés ski; the evening our school group did karaoke in the hotel bar was my first public singing performance – the first of many. I filled six rolls of Kodak film with photos of my new friends and felt, for the first time in months, that high school might actually be okay.

But I did not love the skiing. I hated the skiing. It was late March and the snowfall had been negligible, the slopes slightly too icy for an absolute beginner like me, not enough grip to comfortably stay upright without seriously hurting my calves. At that time, I was one of the tallest kids in my year (very hard to believe now), and definitely the most terrified. Every day I woke up dreading the hours spent on the piste, quietly hoping I might snap a ligament and be forced to spend my days enjoying the warm, safe comfort of the lounge instead. At least I’d have a legitimate medical excuse that didn’t make me look like a gigantic wuss.

In the end, I was taken out of the group and spent the latter half of the week in the company of my head of year, her husband, and two of my French teachers. It was important that I could locate their bright red and purple ski jackets against the stark whiteness of the French mountainside as they patiently encouraged me to move my skis out of snow plough for a few seconds, so that I might travel downhill rather than stay completely still. It was no use. I was utterly useless and any and all attempt at getting me to ski correctly was met with hysterical tears, particularly after someone bumped into me, sending me screaming down the piste only to be rescued by a nice French man who immediately knew I was Anglais on account of my blatant shitness.

This is another thing: all European kids can ski. They learn from birth, skidding out of the womb in a little snowsuit and matching bobble hat.

I came home at the end of the Easter break exhausted, swearing off snow sports for life. Like cooked carrots and going to the gym in the morning, I’m sure it’s perfectly enjoyable for other people, just not for me.

I have been reading Yuval Noah Harari’s book ‘Sapiens’, and the earlier chapters about human (Homo Sapiens) evolution are of particular interest. The takeaway point for me is that in terms of the entire history of the world, the modern human is essentially brand new. We enjoy being on the ground, or at the most extreme end, halfway up a tree collecting fruit, and definitely not many thousands of feet up in the air. Why would we need to be in the air? Television and bed is on the ground!

I’m actually writing this at 37,000ft. We are somewhere over France, and it is 23:08 local time. I am mentally and physically shattered. This, dear reader, is because I have spent the last few days skiing. Not slowly snow-ploughing down a slight incline outside the resort restaurant once before unclipping my skis and eating Kaiserschmarrn, but really, properly flinging myself at high speed down a mountainside.

And do you know what else? I absolutely bloody loved it.

Do you know that feeling you get when you’re on a plane and a sudden blip of turbulence catches you off-guard while you’re listening to a nice podcast, and the image of your imminent death flashes through your mind? That’s one of those evolutionary, Hunter Gatherer throwbacks Harari talks about in his book. Rationally, we know skiing and flying is fine, it’s relatively safe and despite what 24-hour global news feeds would have us believe, serious incidents are very rare. It’s the same fleeting moment of panic I got standing at the top of that mountain the other day, faced with a blank whiteness, fading daylight and snow flurries that stung my eyeballs, feeling that I had neither the requisite skill nor the co-ordination to get to the bottom of the piste without seriously injuring myself or others.

I felt that panic, and I ignored it. Or to be more precise, I acknowledged it and then told it to fuck off. And then I pointed my feet downhill.